We have changed the way that the auto-add function works in the new user interface. We have removed the checkbox "Automatically add new users to the backup" for selecting Exchange and OneDrive users. Instead, if you use a user-based selection, new users will always be automatically added.

Do I need to Enable Auto-Add Users?

Since the "Automatically add new users to the backup" checkbox has been removed, when switching to the new user interface, you must enable auto add users in order to access your connector's configuration. Your user selection will not change, but if you do not make any further adjustments to your configuration, new users will start to automatically be added to your backup.

How can I prevent new users from being added to the backup?

To stop new users from being added, you must open your configuration and deselect All users. Instead, you need to select only groups for the backup.

If you have not already done so, create dedicated groups of users you want to back up from your Active Directory. Then in the backup configuration, select only these groups.

For example, let's say you only want to back up the users in a group named U.S. Sales. In the configuration, select only this group (see image below). This will mean that only the users in this group will be backed up (which you can see in the user list on the right). New users will not be backed up unless they are added to this AD group. 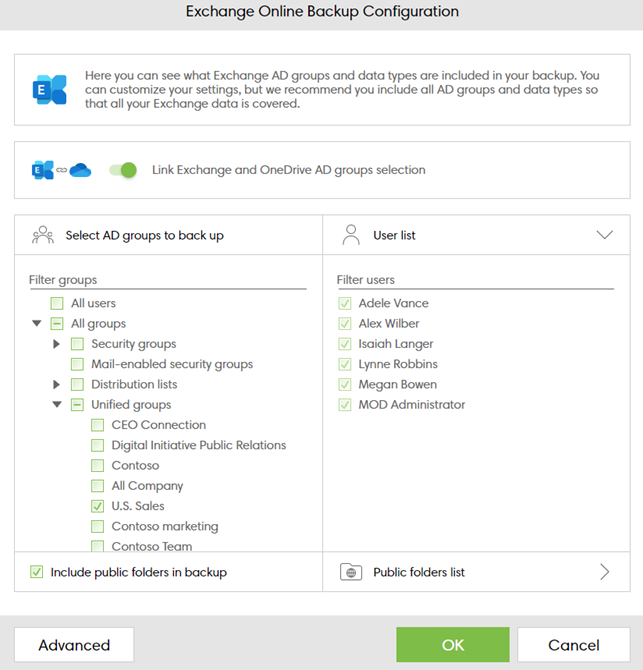 Will new groups be automatically added to the backup?

If All groups or a group type (i.e., unified groups) is selected with a checkbox, then all new groups that are created under these levels (and accordingly all new users who are added to any of these groups) will automatically be added to the backup.

This means if you do not want new groups to be automatically added, make sure to select only the groups you want. In this case, the All groups and group type checkboxes will have a dash, and will not be checked with a check, as seen in the configuration image above.