What are partial snapshots?

If you see partial snapshots, rest assured that this is intended behavior and means that Keepit is backing up a large amount of data. Partial snapshots can appear during the initial backup or if the backup dataset is increased drastically.

When there is a large amount of data, it may take several days or even weeks to make a complete backup, i.e., to create a backup copy of every item on a tenant. And so several times a day during this process, Keepit takes a snapshot of what data has been backed up so far. Each partial snapshots is larger than the one before until it contains your complete dataset.

Keepit displays these partial snapshots so you have immediate access to the data that has been backed up. You can use them to restore and import data, but you must remember that they may not contain all the data you want.

Please also note that during this process, files that are modified or added to the backup set may not be up-to-date or present when the initial backup completes. However, they will be backed up as soon as the next complete snapshot is made.

After performing a complete backup, new partial snapshots might again appear as Keepit completes the next full backup.

How partial snapshots are marked

Partial backups are clearly marked so users know what type of snapshot they are browsing or recovering.

In History Snapshots, partial backups are marked with a special icon: 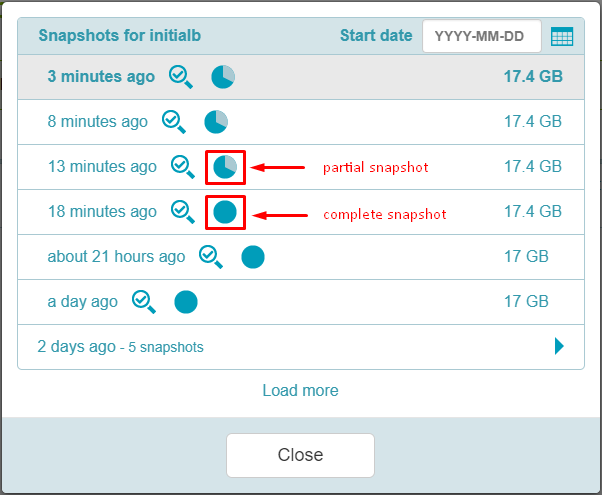 In the Import and Restore dialogs, snapshots are marked with the word "partial" or "complete": 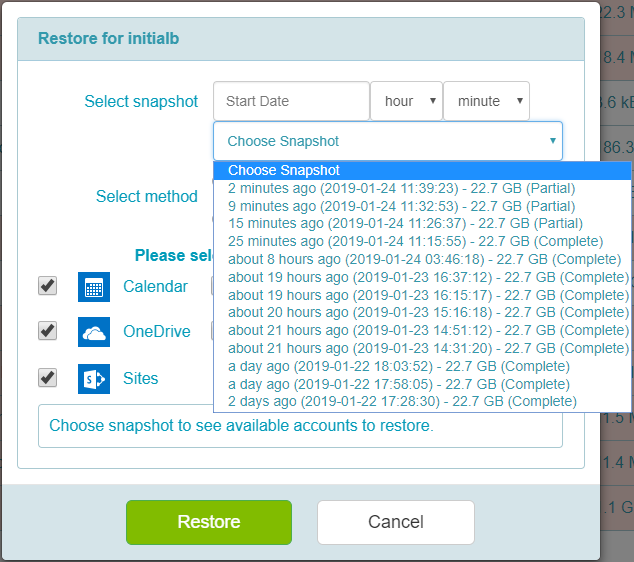 Users must remember that a partial snapshot might not contain the data they want to recover.

If Keepit has both complete and partial snapshots, we advise the user to restore or import from a complete backup if they want their entire dataset recovered:

If Keepit has only partial snapshots, we advise the user check that the data they want is in the snapshot by browsing the connector using that particular snapshot: