Restoring a channel brings back all conversations, but not Wiki pages. Wiki pages cannot be restored, only shared and downloaded.

1. Find the group in your connector and then navigate to the data you want to restore:

What happens to channel data when it is restored?

Note: A shared channel is restored as a standard channel.

All restored messages and replies will be posted by the service account. The name of the original sender will be found in the body of the message as a header inside a green box. 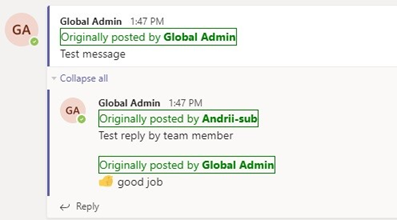 All files, such as images, Word documents, etc., that are attached to messages are saved in the channel in the Files tab and in the team's SharePoint site.

In Keepit, files of public channels are stored under Connector name > Groups & Teams > Group name. A link to this folder can also be found in the channel's folder. These files are not automatically recovered when restoring a group's channel. The group's Files folder must be restored separately.

Files of private channels are stored in the channel's Files folder and are automatically returned to Teams when restoring the channel.

Other Elements of Messages

Embedded text and other items such as code snippets, gifs, stickers, and emojis are restored.

Reactions to messages are not restored.